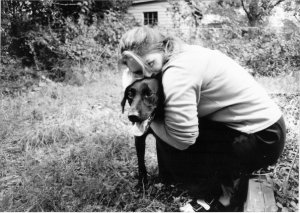 Someday I’ll write something real about her. For now I’m just incredibly sad. The house is too quiet and her favorite squeaky toy lies under the chair and I don’t know what to do with it.

Sweet, sweet Micah. Thank you for being such a loyal friend and companion on the journey. I miss you.

This week I had to choose between three Old Testament Scriptures for the bulletin and for my sermon, to go with the story of Jesus calming the Sea while the disciples freak out. One of the text choices was David and Goliath. I really, really, really wanted to preach on David and Goliath. But for a myriad of other reasons, including some boring practical ones, I chose Job. Despite my whining, it’s a great passage. If you want to read it, click away. Job, after endless trial and torment finally cries out to God in frustration, to which God replies: “Who is this that darkens counsel by words without knowledge? Gird up your loins like a man, I will question you, and you shall declare to me. Where were you when I laid the foundations of the earth? ” God goes on to remind Job of the vastness of creation–the limits, the measures, the boundaries of all that God has created. And while, in someways, it comes across as God yelling and being, frankly, kind of mean to Job, there is in the midst of this conversation, incredible beauty in all that God says.

I write all this feeling incredibly detached. There is so much death and illness surrounding people I love right now. And I’m remarkably calm. The calm in the midst of many storms, for a moment, perhaps. The crazy includes pacemakers becoming part of my vocabulary as are the realities of parents that grow older. You already know about Alzheimer’s, lung cancer and grandmothers. And of course there’s the Athens GA house of aging animals, AKA my mom and step-dad’s home. They’ve lost three (the third of whom was put down today) of their four cats in 6 months. Today Sam, the three-legged wonder cat, used up the last of his nine lives. Losing a leg, but beating cancer, he learned to move so quickly on three legs. But today it came to an end when a blood disease finally had its way with his small body. In my world here in Chicago, the puppy I’ve loved like she’s my own for almost 11 years has a return of cancer and it’s moving quickly, aggressively and cruelly. I watch her bleed and can’t imagine my life without her in it. And know that day is coming soon–but it’s not here, not just yet.

So I find myself thinking about Job. My trials are nothing like his. I know that. I have a job and a family and people who love me. I have a coffee shop and decent coffee and free wifi. I have sunshine and books and a volleyball team. Yes, I am not Job. And neither are any of the people who are far more directly affected by all the ailments listed above. And yet, in the midst of heartache and struggle and pain, it’s hard not to lift up our hands and cry out to God.

Hail Mary, full of Grace. Help me find a parking place. It’s a prayer I use at least once a day in this city. I work with someone who really believes that it’s a legitimate prayer–that God has some control, some say in where we park our cars. That if we are good and pleasing, a parking space will open up. If our intentions are less than ideal, not spot will appear. That God answers that kind of prayer directly. I don’t believe that, although I pray it all the time. Same as I’m not really convinced the St. Joseph statue I buried in the front yard of the Russian Spy’s house will actually help the sale of said house. But I hope.

It’s why I don’t pray “please make the cancer go away” or “please make my Father be 60 instead of almost 78.” I’m not convinced God works like that. And I kinda think that’s what God is saying to Job. Something along the lines of “it’s a bit more complicated than your individual speck of drama. I’ve got a whole planet to look out for.” Which leaves us where? Comfortless? Helpless? Alone? No. In all of this we are more than abandoned children. God moves into the boat, the storming sea, the raging lake that storms and finds the places of calm and brings us to them. A friend of Bishop Gene Robinson said to him once “Sometimes God calms the storm and sometimes He lets the storm rage and calms the child.”

“Where were you when I laid the foundaition of the earth? Tell me, if you have understanding. Who determined its measurements–surely you know! Or who stretched the line upon it? On what were its bases sunk, or who laid its cornerstone whe teh morning stars sang together and all the heavenly beings shouted for joy?”

I trust, call it childlike, call it foolish, but I trust, that God was there. And that God is here. With a little black cat as he left this earth, and with my hurting parents as they held him and said goodbye. With my grandmother as she sings Frank Sinatra and wonders who her daughter is. With my father as he discovers the joys of MRIs. With my dog as she sneezes up blood. And wtih me as I watch, frozen in fear of what it to come.