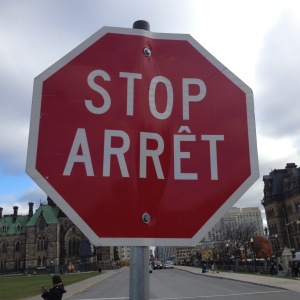 Two weeks ago, I lived without my phone. I was on a quick trip. As the plane descended into Canada, AT&T was kind enough to inform me how much each call, text and inch of data was going to cost me in this part of the world. I tucked my phone away until I returned to the US.

Without my phone and her handy apps, without Google Maps to tell me where to go, I was free to get lost. In the October of Ottawa I felt my face slapped by the chapping winds, I smelled the at once familiar and foreign scent of city life; auto exhaust and freshly baked bread and coffee. I saw the beauty of three colours of cauliflower, purple, orange and green, for sale for a dollar, fresh from the farmer who grew it. I watched busy people rushing to work and tourists walking entirely too slowly. I heard languages–French, Spanish, English and so many others that I couldn’t identify. I nodded at the Jehovah’s Witnesses, who were set up on the street, smiling and talking to each other about their purification rituals. I saw the details of the Parliament Buildings and wondered about the brick layers who built the building. Who were they? What did they do on their days off? Do their descendants come and admire, decades, centuries later, their handiwork? I heard the clicking of my feet against the cement road and felt the rhythm of my steps. Returning home, I met two Georgia men. We talked about whiskey and baseball and the power of a good night of sleep. On the flight itself, I met a physical therapist from Canada who was traveling to volunteer for a week of service. I learned more about Canadian politics and living in our 2 hour conversation than a lifetime of Wikipedia articles could have given me.

Photographer Eric Pickersgill has a series of photos called Removed. By removing the phones from his photos, we see how tethered we have become to our phones. His photos highlight the power they have to remove us from our real life, allowing us to sink into the oblivion of work, distraction, busyness and other. Of course, it’s not just technology that tethers us. We’re tethered by our idols–those things we think will bring us happiness, joy, escape. And sometimes they do, but sometimes they just keep us from being present.

The magic of being untethered didn’t last long. I touched down four days later in Atlanta and grabbed my phone. I texted my beloved, I’m on my way home and made my way through the terminal. I have a friend who calls me at least once a week from Lake Shore Drive as she sits in traffic on her daily commute. I love the connection that the phone gives us. I am grateful for Google Maps when I am lost, or more often these days, looking for a way to dodge Atlanta traffic. Occasionally I even use my phone for work, sending out an urgent email. Most days, I wouldn’t go back to the dumb phone or even, gasp, those days before cell phones.

And yet, there is something lost in our busyness and the myth of our cyber connectedness. At just a month away, the season of Advent is close. I’m thinking about the invitation Advent will bring anew, an invitation to awareness, repentance, watching and waiting. The invitation to stop. I’m wondering how, now safely at home in my regular life, I can again untether myself so that I can keep awake, watching for the promise of what is to come. I’m wondering how I will stop so that I can begin again.